How one builder created the perfect window-forward look for his dream home using the Easy Connect Joining System. 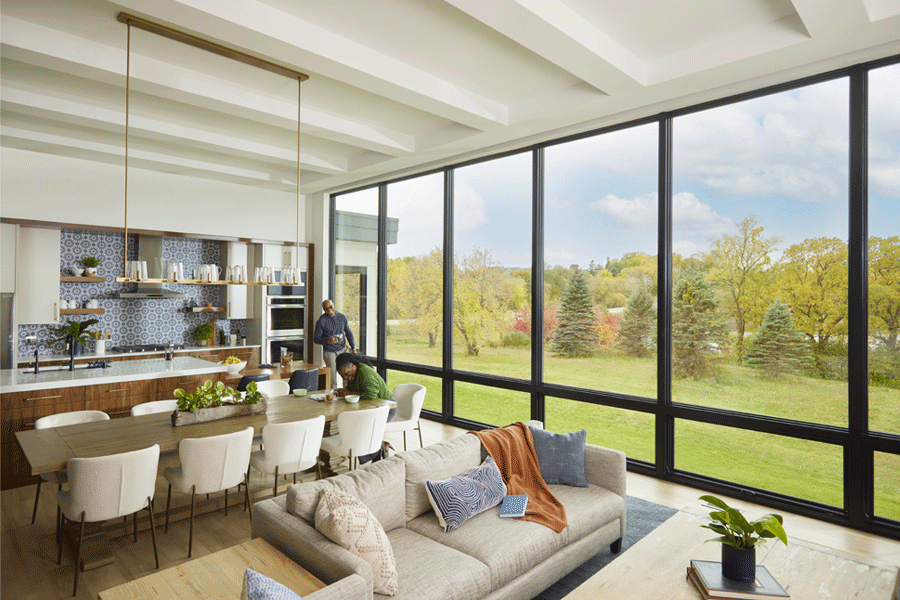 Builder David Frosch’s wife was not interested in building another new home. She told her husband she would only consider it if he could figure out how to build a window wall with narrow sight lines. Mainly, she objected to the posts between the windows. “I told her, ‘Those posts are there to support the home.’ Then the pictures from Pinterest started coming,” Frosch said.

So the owner of Kootenia Homes, a Minnesota-based design-build company, went to his Andersen sales representative Terry Faust and asked how he could pull off the look his wife had in mind. The answer was with to skip framing between units and instead use our Easy Connect Joining System. “It allowed us to design a large window opening 30 feet wide by 12 feet tall with narrow sight lines to maximize the views and create the modern look they were seeking,” said Faust.

The Easy Connect Joining System allows for monumental window walls to be created using smaller subgroups of factory-assembled window combinations that have all the necessary joining components already applied. In Frosch’s case, his window wall included subgroups of A-Series picture windows with awning windows attached below. The partially assembled subgroups meant “installation was much easier to handle on site since we could install these joined units directly into the opening,” Faust said. In fact, contractors surveyed said they could reduce the number of installers needed by 50% with this system.* This not only reduces labor costs, it also improves safety on site, as Faust pointed out.

Frosch ended up creating a window wall that overlooks a lake with spectacular sunset views. The Easy Connect Joining System let him install all those windows exactly as his wife had envisioned. She got the contemporary look she’d been dreaming of, and he got the home he was itching to build.

The Easy Connect Joining System is available with A-Series and 100 Series windows. Ready to dig into the details?