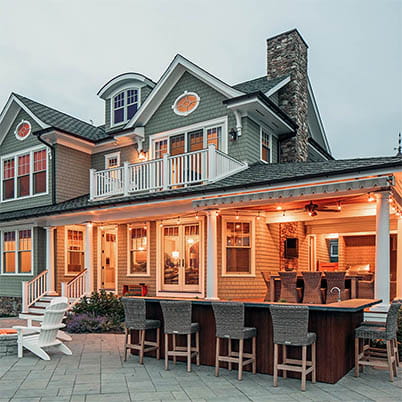 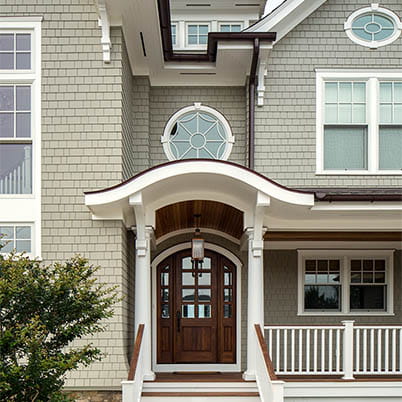 With most lots on the Jersey Shore no bigger than half an acre, local architects and builders know each square foot counts. The Oceana is a 2,800-square foot, 4-bed, 3.5-bath traditional home in Long Beach Island. Designed by Melillo Architecture  and built by CMM Custom Homes, it sits on 150 feet of frontage along a canal that feeds into the Barnegat Bay.

The homeowners wanted to maximize their water views and create indoor and outdoor spaces for entertaining family and friends while still framing the house in a traditional way. So, the design centered on creating dense square footage. It focused on the details of the home – the wall paneling, the trim work, the cabinetry and of course, the windows – rather than its size. The homeowners wanted high-end, luxurious finishes that would be more valuable than the size of the house.

That’s why the builder chose to fill The Oceana with mostly Andersen® A-Series double-hung windows, plus some circle and oval picture windows, and A-Series hinged and gliding patio doors. They loved the interior and exterior detailing of the A-Series windows – how easy the tilt feature made them to clean and how well the exteriors withstood coastal weather conditions in their area. They chose A-Series inswing and gliding patio doors because of their high performance ratings and how their grille patterns tied in to the detailing on the A-Series windows.

With entrances to the home in both front and back, the design aimed to maximize natural light that streamed into the house, showcase the spectacular views of the surrounding waterways and appeal to visitors who approach the home from either the street or the water.

The master bedroom included a six-foot bi-parting gliding patio door off the balcony and oval windows up in the peaks, allowing ample natural light in while remaining architecturally interesting to visitors. They used similar patterns on the front and back windows to tie the look of the house together.