Andersen Corporation, manufacturer of America’s most loved brand of windows and doors*, Andersen®, today announced it has joined the Human Rights Campaign Business Coalition for the Equality Act (H.R.5). With this declaration, Andersen joins a growing coalition of companies calling for the urgent passage of the Equality Act — federal legislation that would modernize our nation's civil rights laws by including explicit protections for lesbian, gay, bisexual, transgender and queer (LGBTQ+) people, as well as improve protections for women, people of color and people of all faiths.

"Every person has a right to equality and to live without fear of discrimination on the basis of sexual orientation and gender identity," said Jay Lund, chairman and CEO of Andersen Corporation. "We committed to this cause, with the support of our employees, because we truly believe the best future comes when every person has equal opportunity to achieve their full potential."

"We call on congress to move this important piece of legislature forward and help ensure every one of Andersen's 10,000 employees and their loved ones, including those who identify as members of the LGBTQ+ community, have the same protections and opportunities," Lund continued.

For nearly 120 years, Andersen has celebrated diversity and championed its longstanding philosophy of working "all together" to create a special, inclusive and rewarding place to work for all employees. The Minnesota-based company is committed to furthering its culture of inclusion in support of and allyship with its LGBTQ+ workforce, advancing internal equity policies and programs to support existing LGBTQ+ employees, and attracting new talent.

Andersen is an equal employment opportunity employer, and shares its policy publicly online, making it visible to job candidates, customers, vendors and homeowners.

"While we've come a long way in the fight for equality, millions of people are still vulnerable to discrimination because of who they are and who they love," said Alan Bernick, senior vice president, chief legal officer and corporate secretary, who is also executive sponsor of Andersen's PRIDE+ employee resource network. "Our country must guarantee non-discrimination protections for LGBTQ+ people by moving forward on this landmark legislation."

Earlier this year, Andersen Corporation was named a Forbes Best Employer for Diversity 2021. The company also committed to participating in the Human Rights Campaign Foundation's 2021 Corporate Equality Index (CEI), the nation's foremost benchmarking survey and report measuring corporate policies and practices related to LGBTQ+ workplace equality. Through participation in the CEI, Andersen is creating more transparency regarding internal policies and communicating its commitment to an LGBTQ+ workforce.

Building an equitable community and using inclusive language also extends to how Andersen's team engages with homeowners and customers.

"In my role, we teach the importance of inclusivity when first engaging with our customers which sets up the rest of their experience with Andersen," said Benjamin Amundson, a member of Andersen's PRIDE+ employee resource network who is a retail marketing representative at Renewal by Andersen, the full-service window replacement division of Andersen. "The intentionality Andersen has put into creating an equitable and inclusive environment has been inspiring to witness — we're making giant strides to make our workplace a different and better environment for all."

The Business Coalition for the Equality Act includes more than 400 major U.S. corporations with operations in all 50 states, headquarters spanning 33 states and a combined $5.7 trillion in revenue. It is believed to be the largest business coalition to ever come together to speak out in support of legal LGBTQ+ equality.


ABOUT THE HUMAN RIGHTS CAMPAIGN FOUNDATION

The Human Rights Campaign Foundation is the educational arm of America's largest civil rights organization working to achieve equality for lesbian, gay, bisexual transgender and queer people. HRC envisions a world where LGBTQ people are embraced as full members of society at home, at work and in every community. 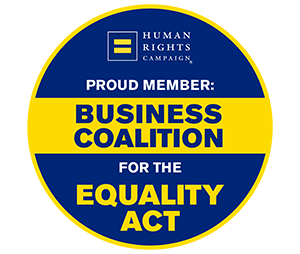