Andersen’s longstanding commitment to our armed forces continues after these heroes’ transition into the civilian world. The company’s philosophy of corporate social responsibility includes giving to organizations that help improve the lives of veterans who sustained life-changing injuries while serving our country. One such nonprofit organization is Jared Allen’s Homes for Wounded Warriors.

Jared Allen, who had a memorable career with the Minnesota Vikings from 2008-2013, was one of the best defensive linemen in the NFL for more than a decade. In his retirement, Allen has used his platform to help build custom, adapted, mortgage-free homes for our country’s most severely wounded veterans.

Andersen’s contributions of window and door products, as well as grants, to Jared Allen’s Homes for Wounded Warriors have helped the organization build handicap-accessible houses for injured U.S. military veterans returning from Iraq and Afghanistan, including those featured below. An additional four homes are planned in Tennessee, Florida, Michigan and California.

“Andersen’s dedication to its mission to ‘improve lives and strengthen communities’ is visible in their significant contributions to the homes of our nation’s most critical wounded veterans,” said Alex Karalexis, executive director of Jared Allen’s Homes for Wounded Warriors. “We always say our partners are part of the Jared Allen family, and we couldn’t be more grateful for their continued support.”

Citizens can honor and thank all of the Jared Allen’s Homes for Wounded Warriors home recipients by signing their online guest books.

“The homes Jared Allen’s Homes for Wounded Warriors build for veterans profoundly impact both the veterans and their families,” said Eliza Chlebeck, Andersen’s corporate communications and community relations director. “We are deeply grateful for the sacrifices of these wounded warriors. It’s an honor knowing our windows and doors help create safe, accessible spaces for these veterans to live and heal.” 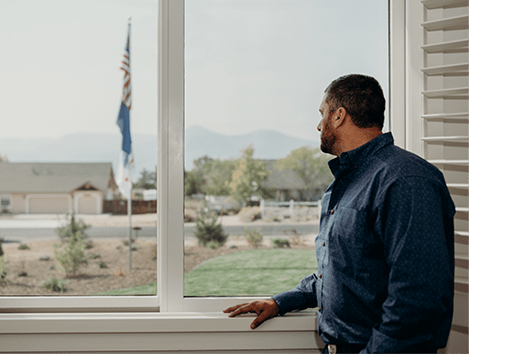 While stationed in Iraq in 2007, Army Specialist Daniel Tingle  was struck by three motor rounds causing severe injuries to his feet and legs. As a result of his injuries, life-saving surgery was necessary, and Tingle was immediately transported to Baghdad and then to Germany for surgeries to treat the wounds to his feet. He was then moved to Fort Sam Houston in San Antonio for further treatment. Here, doctors attempted an experimental surgery using bone and skin from his hip and leg to rebuild his injured left foot.

After months in the hospital and in physical therapy, Tingle was able to walk on his rebuilt foot. Unfortunately, this didn’t last and years later, the constant pain became too unbearable to lead a normal life. At the end of 2015 and after 26 surgeries to address the pain and broken hardware, Tingle had his left foot amputated. Most of the pain has subsided, but a new set of challenges remain as Tingle tries to adjust to life with his amputation.

At a live and virtual ribbon cutting ceremony in early October, Tingle received the keys to his Minden, Nevada, home. For Tingle, his wife and four kids, their new home is everything they imagined. For the first time since his amputation, Tingle is able to move independently around his home. Since the space was built to be completely wheelchair accessible, Tingle can get around safely and with ease without having to rely on his prosthetic leg, which causes pains and sores, both of which have in the past resulted in significant frustration and anger, he said.

Every home built by Jared Allen’s Homes for Wounded Warriors is designed to meet the specific injury and mobility needs of the veteran and their family. “The whole point is to make sure every square inch of the home is suitable for Daniel. Fortunately, we were able to do that,” Karalexis said.

Share a message of gratitude with the Tingle family. 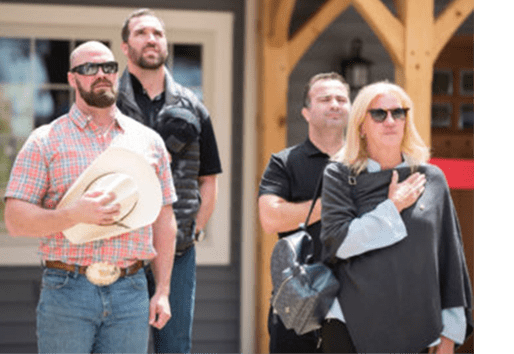 U.S. Army Sgt. Tom Block graduated high school from Waseca High School in Waseca, Minn., in 2005. He attended Minnesota State University at Mankato where he wrestled for four years and had the pleasure of meeting Allen while attending the Minnesota Vikings training camp.

Shortly after his wrestling career, he joined the army as a Ranger with the 3rd Battalion, 75th Ranger Regiment, where he was severely wounded by an improvised explosive device (IED) suicide vest while on his fourth combat rotation on October 6, 2013.

Block was part of a joint task force that prevented a high-profile suicide bombing attack in Kandahar Province, Afghanistan. Block was injured when the bomber detonated herself near the assault force.

Block lost his right eye and most of his vision in the other, in addition to withstanding severe leg injuries and shrapnel wounds across his body. He endured 15 surgeries, grueling recovery and rehabilitation to defy doctors’ expectations. Thanks to his determination and positive attitude, the Army Times named him Soldier of the Year in 2014.

Jared Allen’s Homes for Wounded Warriors teamed up with the Army Ranger Lead the Way Fund to provide Block with a 100-percent handicap accessible home in Derry, NH.

Share a message of gratitude with the Block family. 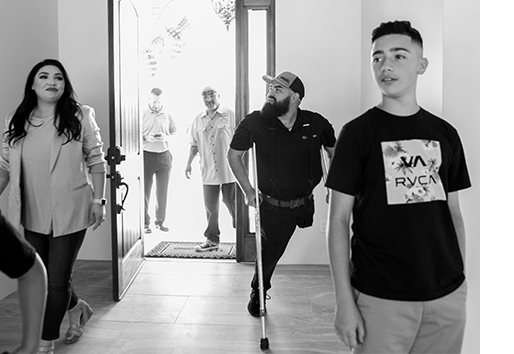 Corporal Garcia enlisted in the U.S. Army in April 2004. He was deployed to southwest Baghdad in September 2004 where his life would change forever the following year. While on a mission to recover two prisoners of war on June 16, 2006, Garcia suffered critical injuries in an explosion.

His unit came across the bodies of the POWs when they realized they had been rigged with explosives. During the unit’s exit, a daisy chain exploded, and Garcia sustained life-threatening injuries, including the loss of his left leg at the hip, pelvic and spinal fractures, and a traumatic brain injury. While attempting to get out, he was also shot multiple times in an ambush.

As a result of his injuries, Garcia went into cardiac arrest. When CPR failed, his chest was opened and manually massaged and shocked to revive him. Once stabilized in Baghdad, he was transported to Germany and then to Brook Army Medical Center in San Antonio, Texas. Garcia required 42 surgeries and 18 months of neurocognitive rehabilitation to recover.

The Peoria, Ariz., home built by Jared Allen’s Homes for Wounded Warriors for Garcia and his family is 100-percent handicap accessible, specifically for his individual needs.

Despite having his life altered forever in combat, Garcia has not allowed his injuries to sidetrack his goals. He currently works full-time as a field engineer, has earned his business degree and master’s degree in construction management with Six Sigma Accreditation and LEAN Certification. He enjoys his home life coaching his son’s football team.

Share a message of gratitude with the Garcia family. 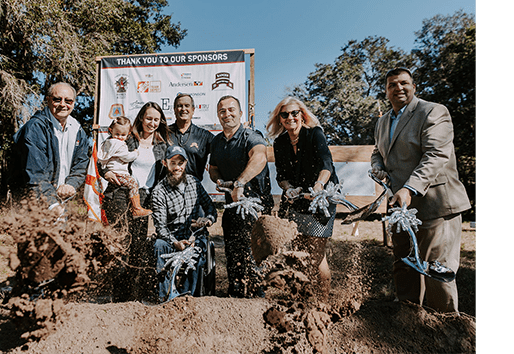 Army Ranger Staff Sergeant Travis Dunn was presented with the Bronze Star Medal for Valor and the Purple Heart after being wounded in combat on December 2, 2014, in Afghanistan. On that day, Dunn and a group of Rangers with Bravo Company, 1st Battalion, 75th Ranger Regiment, and Afghan special operations soldiers were on a joint operation in Nangarhar Province when they came under attack. The group sustained six hours of direct fire engagement. Despite the assault, the unit cleared multiple insurgent-held compounds and killed more than 25 enemy fighters in addition to rescuing a wounded Ranger.

Dunn showed great bravery in the exchange, closing with an armed enemy in a close ambush, as well as on three barricaded shooters. During the assault, he was shot in the upper torso and fell from an embankment, resulting in paraplegia. Despite being paralyzed from the waist down, he remains positive.

In 2019, Dunn participated in the Department of Defense’s Warrior Games — facing competition in archery, track, wheelchair basketball and wheelchair rugby. With his wife, Kelley, and toddler daughter, they are excited for the ongoing construction of their 100-percent handicap accessible home in Florida.

Share a message of gratitude with the Dunn family.

Jared Allen’s Homes for Wounded Warriors is a non-profit organization created for the sole purpose of raising money to build or modify homes for America’s injured Military Veterans. Jared Allen’s Homes for Wounded Warriors was established in October of 2009 after NFL Star, Jared Allen returned home from a trip to the U.S. Military Bases in the Middle East. Jared was moved by the commitment, dedication and sacrifices that our soldiers make every day to protect our freedom.  It is Jared’s hope that this foundation will help make the lives of wounded vets a little bit easier. 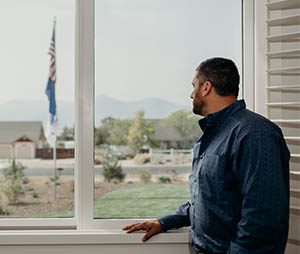