The U.S. military has held a special place in Andersen's history for nearly a century. Yesterday, Andersen Corporation was recognized as a Yellow Ribbon Company by the Minnesota Department of Military Affairs, also known as the Minnesota National Guard, for its commitment to leveraging existing programs and building effective initiatives to support employee service members, veterans and military families. This proclamation builds upon Andersen's longstanding dedication to supporting military veterans, active duty personnel and the extended families who love, nurture and sustain them throughout their training and deployment.

Beyond the Yellow Ribbon is a comprehensive program that creates awareness to connect service members and their families with community support, training, services and resources. To earn the Yellow Ribbon Company recognition, Andersen put forth a rigorous action plan stating how it will build programs and leverage existing support activities for employee service members, veterans and military families.

"At Andersen, we believe in working all together to make our company and our communities stronger. It's a privilege to join the Beyond the Yellow Ribbon program as an ardent supporter of veterans and military personnel who have dedicated their lives to selflessly serving our country," said Jay Lund, chairman and CEO of Andersen Corporation. "We are proud of our employees who serve or have served in the military and we look forward to welcoming more service members and veterans to cultivate long careers with Andersen."

Additionally, on Wednesday Lund signed the Employer Support of the Guard and Reserve (ESGR) Statement, demonstrating the company's commitment to maintaining the strength and readiness of the Nation's Guard and Reserve units.

As part of its comprehensive plan, Andersen commits to new and continued programs that:

"It's my honor to recognize Andersen Windows and Doors for their commitment to supporting servicemembers and their families by becoming a Beyond the Yellow Ribbon company," said Governor Tim Walz. "Our service members face unique challenges during and after deployment, and stable employment with supportive companies can make all the difference in easing those difficulties. Minnesota leads on supporting our servicemembers, veterans, and military families with the support of incredible partners like Andersen Windows."

Furthering its commitment, the company also announced a $25,000 grant from the Andersen Corporate Foundation to Youth Service Bureau in support of its new Military Family Support Program. This program is a direct response to needs identified by the Minnesota Army National Guard and Reserves to assist the families of deploying and returning service members with customized programs and practical solutions to mental health challenges and other obstacles faced by the families of soldiers before, during and after deployments.

Historical Andersen Military Stories
Andersen has been a longstanding supporter of our country's armed forces. 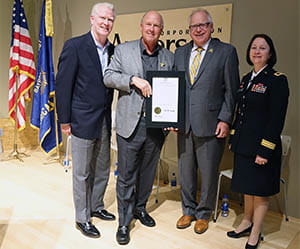