A Tribute to the Women of the Andersen Family

March is National Women’s History Month. We owe a lot to the female trailblazers, innovators, leaders and overall contributors who have influenced Andersen Corporation’s growth and development. While it would be difficult to name each individually, we take this opportunity to honor five women in particular who helped shape Andersen into the thriving business it is today. 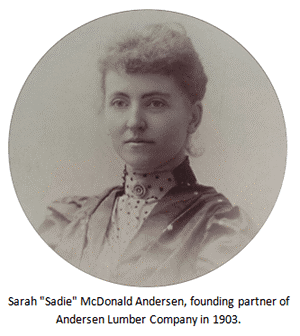 In 1896, five years after the death of his first wife, Hans Andersen married Sarah “Sadie” McDonald and the two began to build their lives in Hudson, Wis. It was there that Andersen Lumber Company was created in 1903 – but Hans did not do it alone. Sadie was a founding partner; her ideas helped influence the launch of the young enterprise. After Hans passed away suddenly in 1914, Sadie remained part of Hudson’s tight-knit community until her death in 1934. 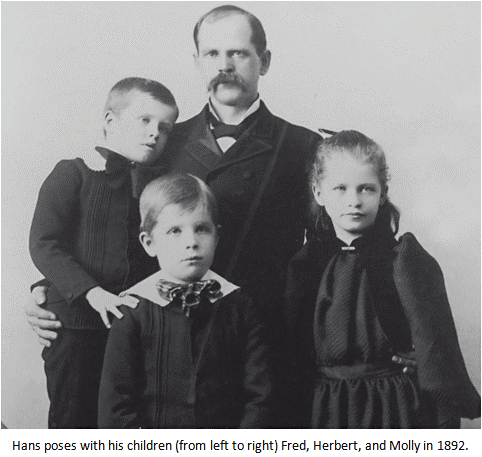 Molly Andersen was one of three children and the only daughter of Hans Andersen. It’s no surprise that the sister to Fred and Herbert — two men who would go on to take over the Andersen presidency and vice presidency, respectively — would bring energy and creative thoughts to the business. Outside of her work with the company, Molly created the first American Field Service recreation camp for U.S. military nurses in Europe during World War I.

Molly lived to watch Andersen rank as the world’s largest specialized window frame factory (1924), change its name to Andersen Frame Company (1929) and then to Andersen Corporation (1937), and hire its first female factory workers (1943). Kitty B. Andersen
During World War II, more than 250 Andersen employees joined the service, leaving many empty positions in the factory. Fred Andersen, the company’s second president and Hans’ son, married a woman by the name of Katherine “Kitty” Blount, who would go on to help the company adjust to the times. She was responsible for directing the hiring of women into the factory workforce.

As the female employees’ “personnel director” during the first few months, Kitty Andersen made life in the factory more pleasant for everyone and very comfortable for the new female employees through initiatives such as overhead music, a new heating system and hot lunches.

Kitty was a major influence in the corporation, serving on the Board of Directors for a half-century. A philanthropist and community organizer, she devoted much of her time to civic causes such as blood drives, the Boy Scouts and Girl Scouts, senior citizen events, and the Bayport Public Library. Betty frequently represented the company at trade shows and other events. Like Kitty, Betty believed strongly in generosity and philanthropy. Together, she and her husband lived by the principle, “From those to whom much has been given, much shall be required.” Sarah Andersen
As the daughter of Hans Andersen’s grandson Hugh and Hugh’s wife Jane Krause Andersen, herself a member of the Andersen board, Sarah Andersen grew up immersed in the company culture.

After finishing her education at Carleton College, Sarah served on the boards of several nonprofit organizations while also accompanying her mother to Andersen shareholder meetings. Over the course of five years, Sarah listened, learned and studied the structure and workings of Andersen’s Board of Directors.

In January 1983, Sarah joined the board and began working to transform it into an actual governing body. Because of her dedication and work, the board began to focus on long-term planning and succession for the company’s continued success.

Unsurprisingly, she was elected chair of the board in 1993 and has since become one of the company’s strongest proponents of change. “Our products make people’s homes and lives better,” Sarah says. “It’s important to me that our business accomplishes something positive and is socially responsible."

In addition to Kitty, Betty, Jane and Sarah, there were several additional women in the Andersen family who served on the Board of Directors: Mary Hulings Rice and Martha Hulings Kaemmer, daughters of Bill and Betty Hulings, and Christine Andersen, daughter of Hugh and Jane Andersen.