Andersen Corporation, America’s premier window and door manufacturer, today broke ground on its new manufacturing campus in Goodyear, Arizona. The company plans to invest more than $105 million in a 500,000 square foot manufacturing and distribution facility and create more than 415 jobs during the first phase of this expansion.

“Our vision is to make the world a better place by living up to the promise that everyone benefits from their association with Andersen – our employees, customers, distribution partners, suppliers, shareholders and the communities in which we live and work, which now includes Goodyear, Arizona,” said Jay Lund. “We are grateful for the many allies who are working alongside us as we embark on this important expansion of our business.”

Andersen’s Goodyear facility will manufacture Andersen® 100 Series products. Delivering beauty, performance and value, the 100 Series product line is one of Andersen’s most popular product lines and a key driver of the unprecedented company growth in recent years. This expansion is part of the company’s strategy to increase capacity to support demand and expand its presence in the western United States.

“Andersen’s selection of Goodyear for its new facility will create hundreds of jobs and significant capital investment in the region,” said Arizona Governor Doug Ducey. “Manufacturing has always been a key driver of job creation and economic prosperity, and this project adds to Arizona’s diverse economic landscape.”

Sandra Watson, president and CEO of the Arizona Commerce Authority agrees. “Arizona continues to be an ideal location for manufacturers like Andersen due to our abundant, high-quality workforce, affordable costs and geographic location with direct access to major world markets,” said Watson. “In turn, manufacturing projects positively impact our economy by creating high-quality jobs, deploying large capital investments and attracting a robust supply chain. We thank Andersen for its commitment to Arizona!”

Goodyear Mayor Georgia Lord called it a “great week for the City of Goodyear” as officials gather to break ground for Andersen Corporation’s new state-of-the-art advanced manufacturing and distribution campus. “We are seeing positive changes in our community, most notably the increase in quality jobs and employment growth. We greatly appreciate Andersen’s commitment to our city and our mission to enhance the community’s prosperity. Goodyear has a strong and focused future; we welcome Andersen as one of our best-in-class partners,” Lord said.

Andersen anticipates a potential total investment of at least $200 million through future expansion of the campus. The campus will be owned and operated by Andersen Regional Manufacturing, Inc., a subsidiary of Andersen Corporation, and is expected to be operational in early 2020.

The products to be manufactured at the Goodyear plant will use a formulation of Andersen’s proprietary Fibrex® material. Fibrex material is a high-quality, long-lasting engineered composite that garnered more than 25 United States patents and is a different and better material used in numerous Andersen® and Renewal by Andersen® product lines. The material contains a blend of wood fiber, mostly reclaimed from Andersen manufacturing processes, and thermoplastic polymer, some of which is also reclaimed, offering durability and energy efficiency.

“Manufacturing has long been a staple of the Greater Phoenix economy,” says Chris Camacho, president and CEO of the Greater Phoenix Economic Council. “Andersen Corporation’s new location in Goodyear is just the beginning of the impact they will have in the community. We congratulate them on their expansion and look forward to their continued growth.”

At the groundbreaking ceremony, Andersen announced a $25,000 donation to Habitat for Humanity Central Arizona, helping to create more affordable housing in Maricopa County. The company has a long-standing commitment to corporate citizenship and to making a positive impact in the communities where employees live and work. 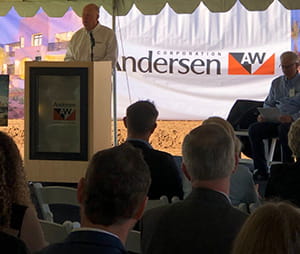