Later this month, Adanech Dinka and her five-year old daughter, Abigail, will have a place to call home thanks to Twin Cities Habitat for Humanity and community volunteers, including Andersen employees.

Last August, 30 female employees participated in Habitat’s Women Build, a program that empowers women by providing the opportunity to address the growing housing crisis in a tangible way, and to learn new skills in a no-pressure environment. They framed Adanech’s home, installed roof sheathing, applied foam and house wrap and, of course, installed Andersen® windows.

“We learned new skills, networked with co-workers, enjoyed beautiful weather and, most important, made a significant difference in the lives of others,” said Mindy Sachs, Andersen’s community relations specialist.

Adanech will receive the keys to her home on March 29. “I want to thank every one of you,” she told Habitat officials. “I promise to take good care of the house and follow in the footsteps of all the volunteers to do the same for other families.”

Andersen Corporation’s partnership with Habitat for Humanity began in 1995 with a formal volunteer and in-kind donation program. Since then, Andersen has helped build hundreds of homes in the communities where our employees live and work. 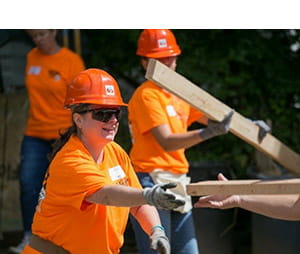