Andersen Corporation has awarded the company’s highest honor for excellence in safety, quality and sustainability to its manufacturing sites in Strathroy, Ontario; Bayport, Minnesota; and North Branch, Minnesota. The 2017 award winners were recently announced at the company’s annual shareholder meeting.

“The annual Andersen Chairman’s Award recognizes excellence in leadership, achievement, innovation and application in the important foundational elements of safety, quality and sustainability,” said Jay Lund, Andersen chairman and CEO. “These three areas of the company are fundamental to who we are, what we stand for, and where our employees are making a difference every day.”

The 2017 Chairman’s Award for Sustainability was awarded to the North Branch site team for their Fibrex® material standard blend project, a project stemming from Andersen’s 2020 sustainability goals. Scott Koenig, vice president of manufacturing and general manager of the Fibrex® strategic operating group accepted the award.

This is the ninth consecutive year of the Chairman’s Award. The program started with a Chairman’s Safety Award in 2009, expanded in 2014 to include a quality award and in 2016, the Chairman’s Sustainability Award was added. At the end of each year, dozens of projects are nominated and these are reviewed through a multi-stage process including both internal and external category experts. The award winners are selected by the Chairman and CEO. Each of the winning facilities will celebrate with a formal, on-site awards luncheon with Lund, and will receive an engraved award to showcase at their facility. 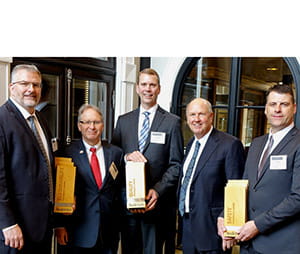