When football fans arrived in Minneapolis for the Big Game, Andersen welcomed them to the Bold North with a custom-built warming.


The warming house was designed to give visitors a little break from the elements with a Northern Lights display that lit up the ceiling, photos with past and present NFL legends, and a chance to take home a piece of history with a commemorative penny from the KARE 11 penny press.

“Andersen Corporation has proudly called Minnesota home for 115 years and we are honored to extend a warm welcome to football fans from around the world,” said Jay Lund, Andersen Chairman and CEO.


The warming house featured windows and doors from the Andersen Architectural Collection, including E-Series awning windows and E-Series hinged patio doors. Warming house visitors experienced how our windows deliver both aesthetics and reliable performance, and how our doors remove the boundary between indoors and outdoors.


KARE 11, an NBC affiliate serving the Minneapolis / St. Paul market, hosted more than 55 live news broadcasts from the warming house throughout the week, drawing large crowds to a studio that featured one of our Wieland® Liftslide curved patio doors.

Andersen was a proud supporting partner of the Minnesota Super Bowl Host Committee. 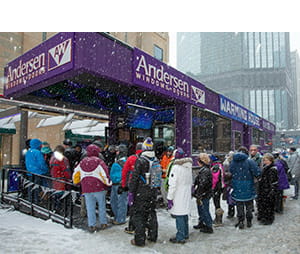